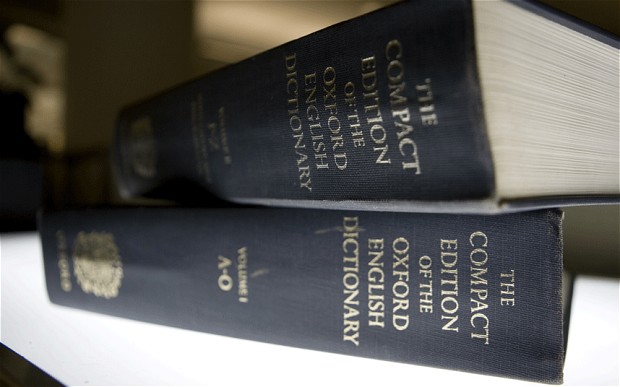 If my bones were tree trunks, they’d have thirty-seven concentric circles inside. This is neither young nor old, and often I feel it is both, depending on the time of day.

Imposter syndrome is a real thing, and as I prepare for my first semester as an adjunct professor, I am wavering between excitement and nervousness, and often I feel it is both, depending on the time of day.

For years, I have yearned for my very own leather-bound, twenty-volume, tissue-paper-paged set of the Oxford English Dictionary. Since they cost around $2,000.00, my more realistic goal became to someday procure a condensed, leather-bound, two-volume version, complete with magnifying glass. They cost about $300.00, a sum I cannot see shelling out for two books, no matter how delicious they might smell. I’ve pictured their spines facing outward, sturdy and thick, on a shelf in my office, where I can reference them as I choose the perfect word for a story, or prepare a lecture that will disclose a word’s long-forgotten etymology, making a century’s old poem ring magically to a student in the back row.

Last week I found a condensed set on eBay. It was described as being in “near pristine condition,” save for a few scuffmarks on the blue leather of volume A-O and a missing magnifying glass. And they were…only…$30.00.

The dictionaries were being sold at this unbelievable price because, somehow, they had been bound upside-down. I didn’t even bid. I clicked “Buy now” and paid for standard shipping and let out a little squeal of delight.

Last Monday, S stayed home from camp and we planned a day of errands and fun. Errands first, he accompanied me to my alma mater/ new job so that I could untangle an IT issue, get my new photo ID, and secure a faculty parking pass.

The first two chores were completed quickly, but then I could not find the room where I was supposed to grab my sticker. As I stood near the window where I vaguely recalled signing for a commuter pass years ago, and as my eight-year-old boy chatted away about Pokémon and where he wanted to go for lunch, a man asked if I needed help.

I told him I needed to get a parking sticker. I asked if he knew what room.

We waited for him to finish up at the window and then followed him, a man twice my age, wearing shorts and running shoes, through the hallways.

About halfway down the main corridor, he looked at me and said, “Are you registering for classes this semester, dear?”

I said, “No. I’m going to get my faculty sticker.”

However, I did not say it with the power that I should have. My voice failed to convey the disgust I felt at being called “dear” by this man who was, I realized, now my colleague, and who had, I suppose, assumed that I could not be on his same level. My feminist pulse had stopped beating in that moment, and something else, something bigger, took over.

I am not completely sure anymore what he said after that, something about what department he worked in.

At the end of the hall I thanked him for his help and then found the room by myself.

As I have mentioned before, I was a student at this school, and not very long ago, because I returned to college the month after I turned thirty, on a quest to immerse myself in the study of literature and the craft of writing because it is a place that has always felt like home. I was a mother then, too, pushing against expectations about what it meant to be a student at a small liberal arts college. I knew my reaction to this man’s question was not because I objected to the notion that I could be a student, but at his assumption that I would be a student. And, most importantly, that I would somehow be okay with him calling me “dear.”

I hate admitting that my hushed reply to his question did not convey any twinge of anger. My reaction was, I think, the result of years of internalized misogyny and my own chicken shit fear of confrontation. The bitter taste that rose up in my mouth the moment this man uttered this question triggered a fight-or-flight response in me. Push back on his comment, or smile and answer politely? And perhaps because I was already feeling somewhat vulnerable, even in such a minor moment, I lost my nerve. Flight won the battle.

As S and I walked the rest of the way down the hall and then joined the zigzagging line of other drivers, I kept asking myself, “Is my outfit wrong? Is my hair too short? Too long? Is it because I am having a late-summer, stress-induced skin breakout, detracting from my wrinkles and making my skin appear adolescent? Is it my sneakers, a little too big, too squeaky, too strange-looking because I bought them on sale from my favorite boutique, and they are rope-soled and biodegradable, but in no way practical or comfortable? Is my posture wrong? My voice unsteady?”

Do I look out of place?

I got my parking sticker and took S out for lunch and back-to-school shopping. We went home and set up the sprinkler and both of us ran through it, jumping and laughing through the freezing cold spray. We played chess in the sun and saw parakeets in the maple tree. And I continued to ponder the morning, wondering how many times I fluctuate between young and old me-selves, the sprinkler-dancer and the academic, the mother and the child.

My upside-down dictionaries have been delivered. And they are huge and heavy and awesome.

“I would rather be a bad feminist than no feminist at all” –Roxane Gay, Bad Feminist: Essays

6 thoughts on “Judging Books by Covers”